From Heraldry of the World
Your site history : Saint Jerome's University
Jump to navigation Jump to search 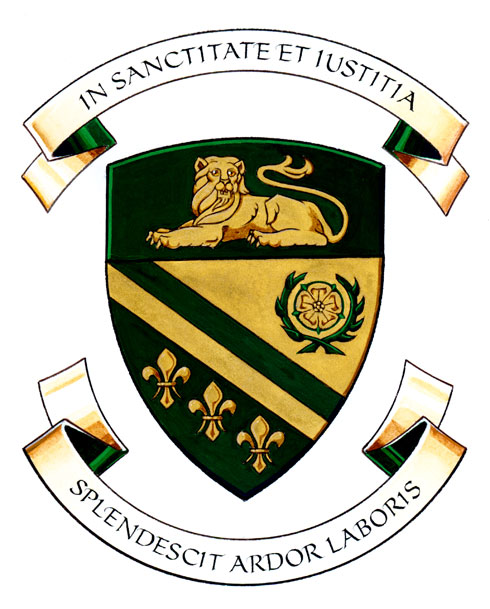 Arms: Per bend Or and Vert, a bend counterchanged between in chief a rose Or barbed, fimbriated and environed by two thorn branches in saltire Vert and in base three fleurs-de-lis Or, on a chief Vert a lion couchant guardant Or.
Mottoes: IN SANCTITATE ET IUSTITIA and SPLENDESCIT ARDOR LABORIS

The arms were officially granted on December 20, 2013.

Green and gold are the traditional colours of the university. The lion is a well-known attribute of Saint Jerome. Representing a chalice, the rose is enclosed in branches adorned with seven thorns recalling the seven gifts of the Holy Spirit. The three fleurs-de-lis evoke the Blessed Trinity, and also the Virgin Mary, whose emblem is the lily. The rose and fleur-de-lis represent respectively the English and French origins of Canada. These colours and symbols have been used by the university for several years.

The motto IN SANCTITATE ET IUSTITIA is a Latin phrase meaning “In holiness and righteousness” (Luke 1:75), was the personal motto of the late Joseph Ryan, who was Bishop of the Diocese of Hamilton at the time St. Jerome’s College was renewed in Kingsdale in 1953. It was adopted by the university with his permission.

The other motto, SPLENDESCIT ARDOR LABORIS is a Latin sentence meaning “The intensity of your work shines forth”.