From Heraldry of the World
Your site history : Saint Matthews, Ingleside
Jump to navigation Jump to search 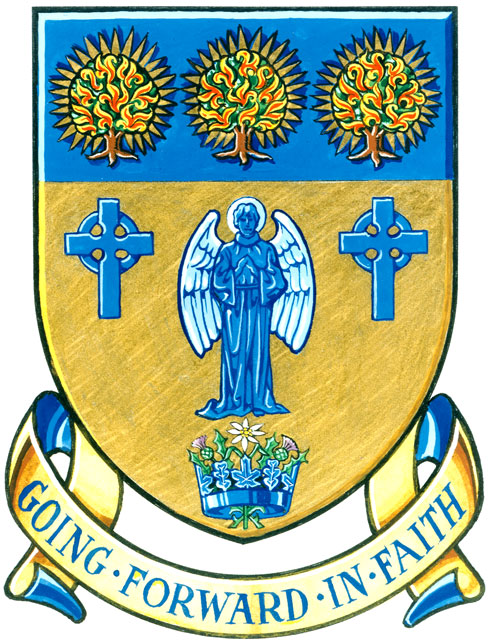 Or a figure of St. Matthew Azure nimbed Argent winged Bleu-Céleste, between in chief two Celtic crosses Azure and in base enfiling a Loyalist civil coronet Azure an edelweiss flower between two thistle flowers their stems conjoined proper on a chief Azure three burning bushes proper irradiated Or; Motto :GOING FORWARD IN FAITH.

The symbol of faith depicted by the burning bush has been used by the Church of Scotland since the early 17th century. The burning bushes represent the joining of St. John’s Presbyterian, Immanual Presbyterian and St. Matthew’s Presbyterian in 1958 under the name of the oldest of the churches, St. Matthew’s at Woodlands, dedicated in 1858. The winged man is the symbol of St. Matthew and thus honours the gospel writer for whom the church is named. The Celtic crosses suggest the ancient roots of Presbyterianism in Scotland from the sixth century. The Loyalist coronet recognizes the German-speaking Loyalists from the Mohawk Valley near Albany, New York, who having been granted land for their loyalty to the Crown settled in the region. The edelweiss and thistles encircled by the coronet commemorate the German and Scottish heritage of the region’s earliest immigrants.

The motto was chosen by the members of St. Matthew’s congregation and honours the two hundred year history of the Presbyterian faith in Glengarry.