From Heraldry of the World
Your site history : Saint Pierre et Miquelon
Jump to navigation Jump to search

Saint Pierre et Miquelon is a French overseas territory on the Canadian East-coast. 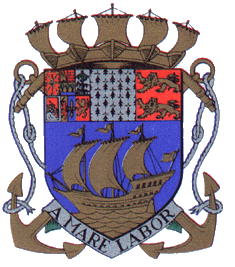 The arms show in the upper half arms for the regions of the Basque Country, Brétagne and Normandie, all in France. Most of the inhabitants of the islands descend from fishermen from these regions. The boat represents the importance of fisheries, and as well Jacques Cartier, coloniser of a large part of Canada.

The motto, anchors and crown all symbolise the importance of fishing and sailing.