Saltburn and Marske by the Sea

From Heraldry of the World
Your site history : Saltburn and Marske by the Sea
Jump to navigation Jump to search 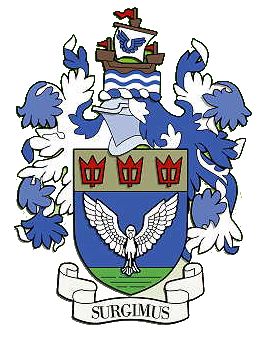 Arms : Azure rising from Waves a Seagull affrontee proper on a Chief Or three Tridents' Heads Gules.
Crest : On a Wreath Argent and Azure on Water barry wavy a Roman Ship proper with three Pennons flying to the dexter Gules the sail also proper charged with two Wings conjoined in lure Azure.
Motto: 'SURGIMUS' - We rise.

The arms refer to the district's seafaring interests and associations, while the gull indicates its aspirations, also expressed in the motto.

The three tridents represent Saltburn, Marske, and New Marske, partners in the district, each with its place in the shield.

The arms are now used by the Saltburn, Marske, and New Marske parish council.