From Heraldry of the World
Your site history : Sankt Gallen (canton)
Jump to navigation Jump to search 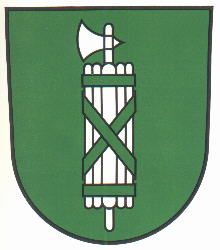 The arms of Sankt Gallen date from 1803 and are a typical symbol for freedom after the French Revolution.
The area of the canton is for a large part based on the territory of the powerful Sankt Gallen abbey. The abbey also had much property in other parts of Switserland, Tyrolia and the Black Forest (Schwarzwald, now in Germany). The arms of the abbey showed a black bear on a golden shield. These arms are still used in slightly different colours by the city of Sankt Gallen.

In 1468 the Abbots acquired the County of Toggenburg, which used a canting dog in its arms. The two symbols were often combined in the arms of the abbey (see below).

Other territories in the present canton included the Rheintal district, the County Sargan, the Gaster district and the County Werdenberg. Each of these territories used rather different arms.

The new canton was created in 1803 and in March it was first decided that the colours of the canton were to be silver and green. In April 1803 the present arms were adopted by the new council. The arms have not basically changed since. Still several aspects of the arms have led to serious discussions during the centuries.

The official description of 1803 did not mention the direction the axe is facing. Thus the axe is often seen facing both left and right in all kinds of images, including the official seals. It happened that the official seal showed the axe facing left and the letterhead of the canton showed the axe facing right. Only in November 1946 when the arms were officially described and adopted again, it was decided that the axe should be facing right.

In 1803 it was described that there were 8 sticks in the bundle, for the 8 districts in the canton. However, in 1831 the canton was derived in 15 and in 1918 in 14 districts. It was sometimes attempted to use 14 or 15 sticks. However, it was not described how many sticks were actually visible. In 1946 it was again decided that 5 sticks would be visible, but the description still mentions 8 sticks.

Finally, in 1925 the Swiss postal service proposed to make the green bands a different colour, when they were devising the stamp series with cantonal arms. The canton decided that the bands were to be green, but nevertheless sometimes red and black bands were used, even in official publications. Again, in 1946 it was decided that the bands remained green.During the centuries several proposals were made to restore the old arms with the bear, sometimes with other symbols from the other cantons combined, but these were never treated seriously by the cantonal government.