From Heraldry of the World
Your site history : School of Pharmacy, University College London
Jump to navigation Jump to search 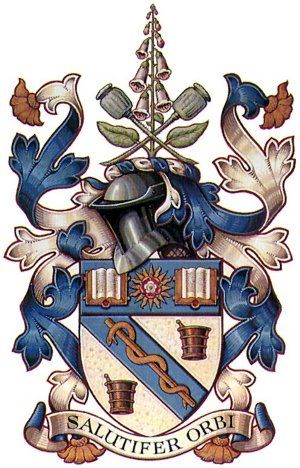 Arms : Argent, on a bend azure between two mortars, in each a pestle proper, a rod of Aesculapius Or; on a chief of the second a Tudor rose radiated between two open books also proper, edge and clasped gold.
Crest: On a wreath of the colours, In front of a foxglove leaved and flowered, two poppy boles stalked and leaved in saltire, all proper.
Motto: Salutifer Orbi

The arms were officially granted on March 3, 1950.

If you have any information on these arms of Pharmacy, University College London mail us !