From Heraldry of the World
Your site history : Scotland
Jump to navigation Jump to search 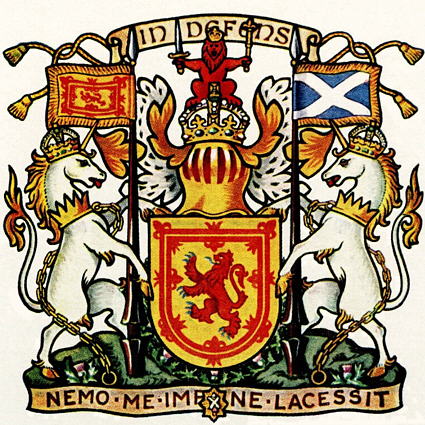 Or, a Lyon rampant gules armed and langued azure within a double tressur flowered and counter-flowered with flowers de lis of the second, Encircled with the order of Scotland the same being composed of Rue and thistles having the Image of St. Andrew with his crosse on his brest y unto pendent. Above the shield ane Helment answerable to his Majesties high qualitie and jurisdiction with a mantle or doubled ermine adorned with ane Imperiall Crowne beautified with crosses pattee and flowers de lis surmounted on the top for his Majesties Crest of a Lyon sejant full faced gules crowned or holding in his dexter paw a naked sword proper and in the sinister a Scepter both erected paleways supported be two Unicornes Argent crowned with Imperiall and goarged with open Crownes, to the last chains affixed passing betwixt their fore leggs and reflexed over their backs or, he on the dexter imbracing and bearing up a banner of cloath of gold charged with the Royall Armes of Scotland and he on the sinister another Banner azure charged with a St Andrews Crosse argent, both standing on ane compartment placed underneath from which issue thistles one towards each side of the escutcheon, and for his Majisties Royall Motto's in ane escroll over all In defence, and under on the table of the compartment Nemo me impune Lacessit.

The arms with the lion and the tressure were used as the arms of Scotland for the first time during the interregnum of 1290-’92 when the deputies from the kingdom charged their seal with the arms.

During the reign of Queen Mary Stuart the arms were clearly used as the Royal arms of Scotland. Her son James VI, who could not quarter his arms with other blasons bore the crowned arms of Scotland for a short time, these arms being the arms of the Kingdom at the same time. This changed again when he was also crowned king of England in 1603, when he added the lion as a quarter in his arms. Ever since the English and British kings and queens have used the Scottish arms as part of their arms.

At the Act of Union of 1707 the kingdom of Scotland ceased to exist and the realm became an integral part of Great Britain. The arms of this Great Britain showed an impaled shield of the arms of the former kingdoms of England and Scotland.

When in Scotland, the royal arms show the Scottish lion in the first quarter.

The actual meaning or origin of the arms is not known.

As supporters most often one or two unicorns have been used. Again, the origin of these is not known.

The arms above also show two banners, one as a banner of arms, the other with the silver saltire in blue, the St. Andrew's cross. St. Andrew is the patron saint of Scotland. During the rule of Oliver Cromwell, the saltire was shortly used as the arms of Scotland, as it supposedly represented the people and the old arms the royalty.

Below the shield on the compartment, the third symbol of Scotland, the thistle, can be seen. According to legend, the thistle as a national symbol dates from the battle of Largs (1263), when one of the Danish invaders gave away an attempted surprise by his cry of agony caused by stepping barefooted upon a thistle.

Its earliest appearance is on a silver coinage of 1474, in the reign of James III, who probably used the thistle as one of his badges.

In 1540, when the thistle had become recognised as one of the national emblems of the kingdom, the foundation of the Order of the Thistle stereotyped the fact for all future time. The conventional heraldic representation of the thisle is as it appears upon the star of that Order, that is, the flowered head upon a short stalk with a leaf on either side. Though sometimes represented of gold, it is nearly always proper. It is still a very popular symbol of Scotland.

The arms are widely used as can be seen from the images below (all from Edinburgh).

The arms used on collector's items: