From Heraldry of the World
Your site history : Scout Association
Jump to navigation Jump to search 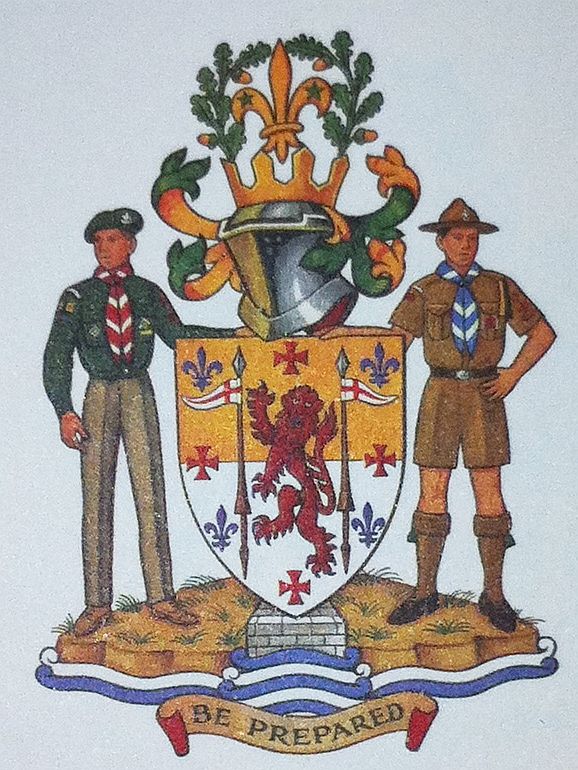 Arms : Per fess Or and argent, a lion rampant guardant gules between two tilting spears palewise proper between four fleurs-de-lys azure and four crosses formy in orle gules.
Crest: Issuant out of a crown vallary Or, two oak branches proper, fructed and enclosing a fleur-de-lys Or charged on each lobe with a mullet vert. Mantled vert, doubled Or.
Supporters: On either side a Scout, the dexter in the uniform of the present, the sinister in the uniform of the past, upon a compartment representing Brownsea Island with a bay and jetty proper.
Motto: Be prepared.

The shield is based on the arms of Robert Stephenson Smyth Baron Baden-Powell , the "Chief Scout of the World", whose book Scouting for Boys was first published on this day in 1908. The supporters, "a Scout in the uniform of the present" and "a Scout in the uniform of the past", stand on a compartment representing Brownsea Island, where Baden-Powell held the first ever Scout camp in the summer of 1907. The crest is the emblem of Scouting, the fleur-de-lys. Its three lobes represent the three parts of the Scout promise, and the five-pointed stars surmounting it represent the ten Scout laws.