From Heraldry of the World
Your site history : Shrewsbury
Jump to navigation Jump to search

Incorporated into : 1974 Shrewsbury and Atcham (2009 Shropshire) 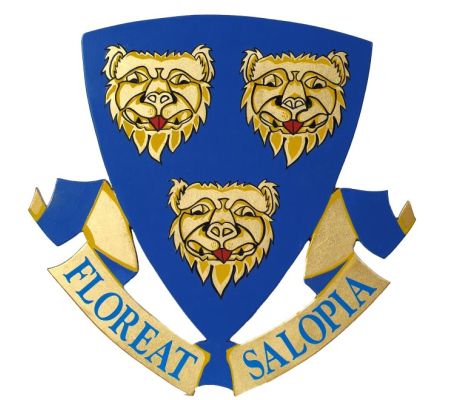 The arms were officially recorded in 1623.

Shrewsbury is an ancient borough. Its earliest surviving charter, granted by King John in 1199, refers to an even earlier one of Henry I, and before the time of James I it had been granted 32 charters conveying many rights and privileges to the town. Its Coat of Arms cannot be dated with certainty, but they appear on the Town Seal of 1425 and were confirmed by the Heralds during their Visitation of Shropshire in 1623. The arms also appear on the Market Hall in the Square, which was built in 1595.

The reason for the occurrence of leopards' heads on Shrewsbury's coat of arms is less readily explained. It has been suggested that they are really the three gold lions which have formed the English Royal Arms since the twelfth century. Possibly Shrewsbury was allowed to use the royal lions as their Arms by one of the medieval Kings, perhaps Edward I, who often made the town his headquarters during his conquest of Wales in the late thirteenth century and who substantially rebuilt the Castle. Certainly the three Royal leopards or lions formed the entire shield of Edward I, in whose time Shrewsbury, as a military centre of great importance, began to assume its medieval aspect of a semi-royal city.

Alternatively, it may be that the loyal burgesses of Shrewsbury themselves decided to adopt the charge to demonstrate their fidelity to the King.

The three leopards' faces been called locally as the three "loggerheads", a term which has puzzled many historians over time, as there is no logical linguistic explanation thereof. The term is still used widely and also used by a famous local pub.