From Heraldry of the World
Your site history : Simon Fraser University
Jump to navigation Jump to search 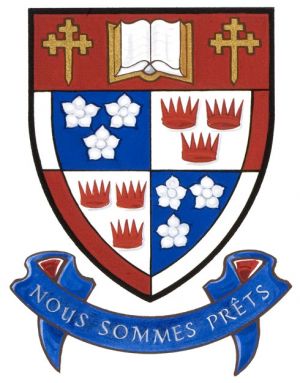 The design is based on the arms of Fraser of Lovat, from whom the university’s namesake was descended, via the Frasers of Culbokie. The blue quarters with white “fraises” (i.e., strawberry flowers; the word is a pun on the name Fraser) are the basic Fraser arms, while the white quarters with red crowns are those of Lovat. The cross-crosslets in the chief are taken from the arms of Macdonnell of Glengarry and thus mark Simon Fraser’s descent from this family. The book is a symbol of education.

The motto means “We are ready.” This is a variation of the traditional motto of the Clan Fraser and represents the way in which students and faculty are prepared for study, teaching and research.

The previous arms were officially granted on January 21, 1965 (Scotland). 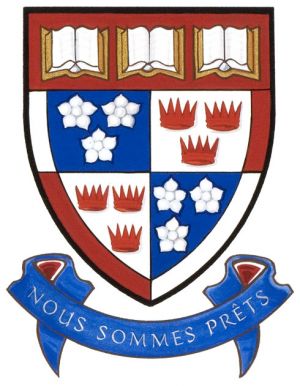 The symbollism is the same, except for three books in chief.

Literature: Images and infor from http://reg.gg.ca/heraldry