From Heraldry of the World
Your site history : Sligo (county)
Jump to navigation Jump to search 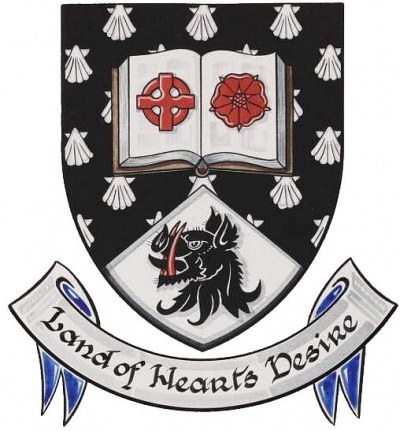 Sable, semée of escallops argent an open book proper thereon in the dexter a celtic cross and in the sinister a rose gules, on a point in base of the second, a boar's head erased of the first armed of the fourth, with the Motto: Land of Hearts Desire.

The arms were officially granted on September 8, 1982.

The tinctures sable and agent are predominant and representation of the name of the County - Sligeach - (an escallop shell) is effected by sprinkling the field of the shield with escallops.

In the upper part of the shield is placed an open book, with on the right hand side a red rose. The design represents collectively the literary and cultural history of the County - the cross referring to such early material as the Book of Ballymote and Lecan, and the rose to the poetry of W.B. Yeats, in whose work the red rose was a significant theme.

In the lower part of the shield is placed a boar's head, in recollection of the episode of Diarmuid and Gráinne.

The Motto: Land of Hearts Desire, is taken from the title of a play by Yeats which has a local setting.