From Heraldry of the World
Your site history : Society of Antiquaries
Jump to navigation Jump to search 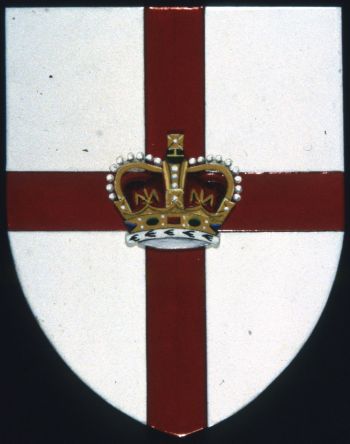 Argent on a cross gules a regal crown proper and for the crest an antique Roman lamp.

The arms were never officially granted, but adopted, after a long process, in 1770.

The process to obtain a seal and arms for the society started in 1751 when it received its charter. Members could come up with specific designs. As may be expected the suggested designs were many and various and, after the fashion of the times, elaborately symbolic. Discussion was also protracted despite the fact that Norroy King of Arms, Charles Townley, had, in May 1751 generously proposed a design and offered, quite free of charge, a patent for shield, crest supporters and motto.

Some members believed that the seal and the arms should be identical but obviously some did not for of the many designs for the seal which survive few are in any sense heraldic. They include a personification of the Nile leaning on a sphinx, Antiquity introducing Truth to History much in the style of the three Graces, and Antiquity regarding the ravages of Time as represented by classical ruins. The proposals made for armorial bearings included Britannia under a Gothic arcade, the supporters being a Druid and a Saxon, and St George and the dragon, the supporters being sphinxes etc. A few of the designs were even more fanciful and included the "Temple of Honour with Time in mournful attitude by the door being opened by Virtue".

A more restrained suggestion, by Dr William Stukeley was for a shield party per pale azure and sable, a lion crowned rampant regardant, holding in its right paw a sun Or. The symbolism was described as follows:
"The lyon intimates that generous nature and noble ardor which preserves and restores from the injury of Time. Regardant, he looks back to time past. He holds a sun in glory in his right paw. The rising sun dissipates the mists and obscurity of night and oblivion. The field is parté per pale Azure et Sable, meaning day and night; the lyon is argent, sun or. The Crest is an eagle, whose sharpest sight reaches the greatest distance. He holds in his talon a wolf's head erased, a wolf is the emblem of devouring time. Supporters, a golden lyon, as a compliment to the Sovereign, who gave the Charter; and an eagle Sable. Otherways, for a scutcheon, take a picture of Britannia as on the reverse of halfpennys; for crest an antique lamp; a Druid for Supporter"

Nothing came of any of the foregoing and things dragged on for three years. In July 1754 a member was moved to ask if progress had been made and went on "I think Stonehenge should be the principal things expressed, and if a Crest, the British Oak, and if Supporters a Pict and a Druid".

A further fifteen years went by and in April 1769 it was mooted that a common seal be provided: "the Device Gules, a Lamp Or, the Inscription Soc. Antiquar. Lond. Exurge, Non Extinguetur". It would thus seem that the Council had finally determined that the seal and the shield of arms should be identical. More delay occurred, the idea of the lamp was rejected, but finally, in June 1770, Thomas Pingo engraved a seal with the cross and crown, and for the crest an antique Roman lamp based on the one Dr Stukeley has exhibited all of fifty three years earlier.

If you have any information on these arms of Antiquaries mail us !