Society of Company and Commercial Accountants

From Heraldry of the World
Your site history : Society of Company and Commercial Accountants
Jump to navigation Jump to search

SOCIETY OF COMPANY AND COMMERCIAL ACCOUNTANTS 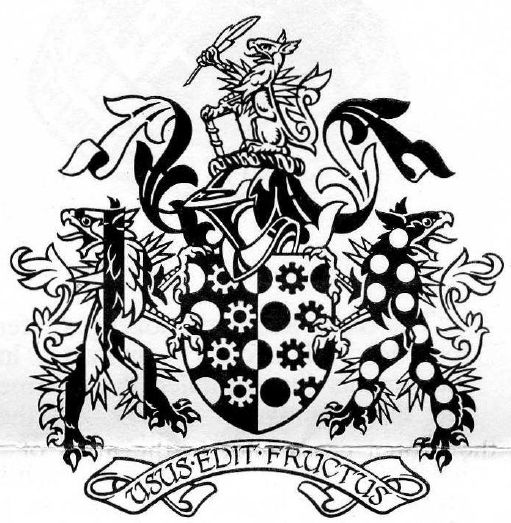 Arms : Per pale Or and Sable semy of Roundels and Annulets embattled all counterchanged.
Wreath: Or and Sable.
Mantling: Sable doubled Or.
Crest: A Male Griffin sejant erect Or langued rayed and holding in the dexter paw a Quill Pen quilled Gold and in the sinister an Open Book clasps of the first all Gules
Supporters: On either side a Male Griffin reguardant armed langued and tails Gules beaked membered and rayed Or that to the dexter Sable semy of Plates and that to the sinister paly of six Argent and Sable
Motto: USUS EDIT FRUCTUS

The arms were officially granted in 1975. Supporters were added in March 1982.

The shield is an allusion to the calculator, an essential tool in accountancy.

The Male Griffin - the traditional "Guardian of Gold" - in crest and supporters appears to illuminate and probe even the most inaccessible financial crevice with its golden rays, the vigilance and confidentially inquisitive attitude of all good accountants emphasised by the reguardant attitude of the supporters. The silver and black stripes represent columns of figures. The Griffins' tails are Gules in reference to the desire of all good accountants to persuade clients to "put behind them" red entries in their ledgers.