From Heraldry of the World
Your site history : Society of Radiographers
Jump to navigation Jump to search 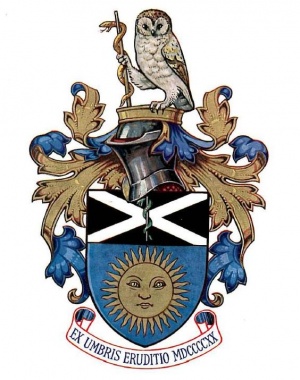 Arms : Azure, a sun in his splendour Or; on a chief sable a saltire argent surmounted by a rod of Aesculapius proper.
Crest: On a rim Or a white owl proper holding with the dexter claw a rod of Aesculapius gold. Mantled azure, doubled Or.
Motto: Ex umbris eruditio MDCCCCXX

The sun is associated with healing and is a source of radiation. The white cross on the black background represents light and shadow. The X also refers to X-rays.

The rod of Aesculapius is a commonly used medical heraldic device representing the staff of life entwined by the serpent of sickness.

The crest also shows the rod of Aesculapius. The white owl in the crest represents wisdom and is all-seeing.

The motto reads: From a shadow cometh knowledge (light) 1920

Literature : Information brochure from the society