From Heraldry of the World
Your site history : South Ayrshire
Jump to navigation Jump to search 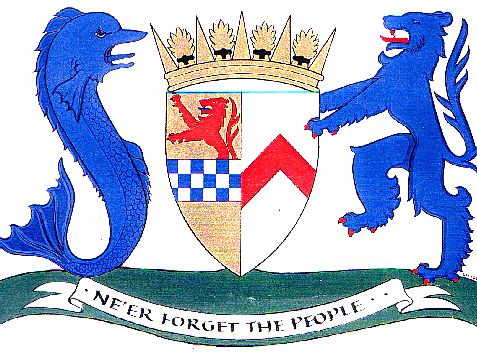 Per pale Or and Argent: dexter, issuant from a fess chequy Azure and Argent, a demi-lion rampant Gules (for Kyle), sinister, a chevron of the Last (for Carrick).

Above the Shield is placed a Coronet appropriate to a statutory Area Council, videlicet:- issuant from a circlet eight paling piles (three and two halves visible) Or and eight garbs (four visible) of the Last, banded Sable; and on a Compartment below the Shield, on which in an Escrol is set this Motto 'Ne'er Forget the People", are set for Supporters, dexter, a dolphin Azure and sinister, a lion Azure.

The arms are those of Kyle and Carrick District council, with the addition of the supporters.

The motto also is a new addition and is taken from a poem by Burns.