From Heraldry of the World
Your site history : South Dublin
Jump to navigation Jump to search 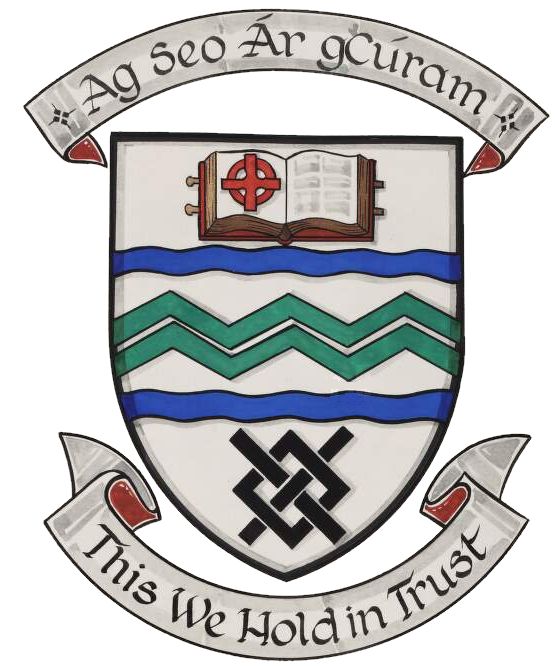 Argent two barrulets dancettée vert between as many bars wavy azure, in chief an open book proper garnished or the dexter page charged with a Celtic cross gules and in base a fret couped sable. Mottoes : This we Hold in Trust and above Ag Seo Ár gCúram.

The arms with the Motto "Ag Seo Ár gCúram" attempts to symbolise in heraldic terms what is seen as the essential characteristics of the Council's administrative area historical, topographical, environmental, and man-made features. The area is traversed by two important water courses, namely the rivers Liffey and Dodder, symbolised here by the blue wavy bands traversing the shield. The attractive hill and mountain ranges which form the southern limits of the area are stylistically typified by the gently elevated linked series of inverted v-shapes.

The area's renowned monastic and ecclesiastical traditions centred on St. Maelruain's foundation at Tamhlacht - which of course accounts for the name of Tallaght - are symbolised by an ancient book bearing a Celtic cross in red. This latter recalls the celebrated Felire Oengussa or the Martyrology of Tallaght (8/9 century), which is a calendar of early Irish Saints and their works. At the base of the shield there is an interlaced pattern or fret to convey the notion of infrastructure in general, the construction of roads, buildings, and so forth, reflecting the fundamental work of the Council.

The Motto is "Ag Seo Ár gCúram" - This we hold in Trust, an admonition to value, to preserve and develop with due regard to the natural beauty of the area.