From Heraldry of the World
Your site history : South Eastern Railway
Jump to navigation Jump to search 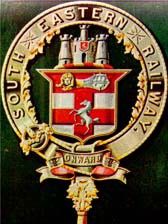 Established as the London & Greenwich Railway and later acquired the Canterbury & Whitstable Railway, the first in south-eastern England, opened 1830. The arms show the red cross of London with the white horse of Kent at fess point; the Cinque Ports on the chief, as a Crest Dover Castle. The motto Onward we shall meet again.