From Heraldry of the World
Your site history : South Pembrokeshire
Jump to navigation Jump to search 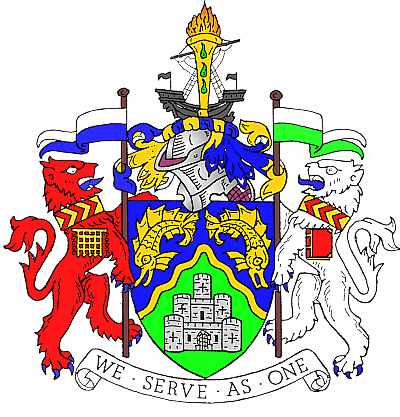 The shield represents heraldically the ancient division of Penfro ("the headland") and its joint character as a seaside holiday area and an historic rural area. The top half of the shield is blue with two gold dolphins like the supporters of Tenby, representing fishing and coastal resorts. The lower half, suggesting the promontory, is green with a gold wavy edge denoting the sandy beaches. The district was governed in mediaeval times from the historic castles which dominated the promontory; the link between ancient and modern government is suggested by a castle of five towers symbolising the union of the five Penfro councils in one authority.

The crest shows an ancient galley similar to that in Tenby's crest represents the traditional maritime interests of the fishing ports and the Naval dockyard. In front of it stands a golden flaming torch, symbol of natural energy as produced by power station and oil refineries. The gouttes d'huile or drops of oil, a very old symbol in heraldry indicate the potential importance of the oil industry to the district.

The supporters represent associations with the Earldom of Pembroke whose various holders held palatine status in Penfro, and other historial allusions. The red lion and the white lion are those of the Marshal Earls and the Herberts respectively, and they wear collars bearing the red chevrons on gold of the de Clares, Gilbert and Richard ("Strongbow".) the first Norman Earls.
These lions also support the arms of Pembroke. Here they hold the forked pennons from the Tenby arms, that on the left white and blue, and denoting the de Valence Earls, that on the right bearing the Tudor colours of white and green. The red lion is charged on the shoulder with the gold portcullis badge of Henry VII, who was born in Pembroke Castle, and the white lion with a red book embellished with gold alludes to the famous chronicler Giraldus Cambrensis, rector of Tenby, born at Manorbier, and to the great Welsh legendary Tales of the Mabinogion, one of whose heroes, Pwyll,Prince of Dyfed, lived at Narberth Castle. The colour of the book recalls that the Mabinogion proper were,contained in the Red Book of Hergest.