From Heraldry of the World
Your site history : South of England Building Society
Jump to navigation Jump to search 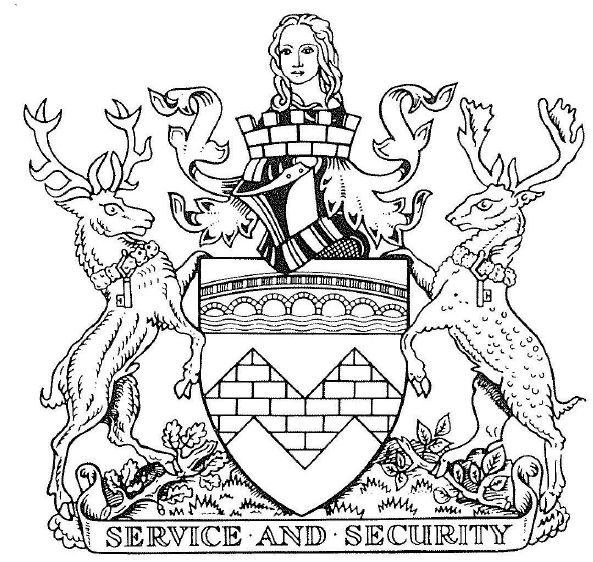 Arms: Or, a fess dancetty of two points gules, mazoned argent, on a chief azure, out of water barry wavy in base a representation of Maidenhead Bridge proper.
Crest: out of a mural crown gules masoned argent, a maiden's head and shoulders affronty proper, vested azure mantled azure, doubled argent.
Supporters: on the dexter side a stag resting the interior hind hoof on a branch of oak fructed and on the sinister side a buck resting the interior hind hoof on a branch of beech all proper each gorged with a wreath of thrift flowers also proper pendent therefrom by the bow a key, wards outwards Or.
Motto: Service and Security

The arms were officially granted in 1959 to the then Maidenhead Building Society.

The fess dancetty makes the initial letter of the name of the Society. The suggestion of brickwork, the mural crown, keys and thrift flowers refer to houses, house ownership, and saving. The gold of the field is said to represent financial security.

The maiden's head is similar to that of the Borough of Maidenhead's arms. The stag represents the county of Berkshire and the buck is for Buckinghamshire.