From Heraldry of the World
Your site history : Southam
Jump to navigation Jump to search 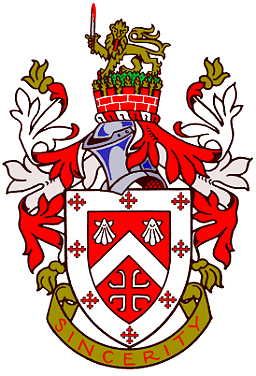 Arms : Gules a Chevron between in chief two Escallops and in base a Cross cercelé Argent on a Bordure also Argent eight Cross crosslets of the field..
Crest : On a Wreath of the Colours out of a Mural Crown Gules masoned Argent therein a Circlet of Wheatears Or a Mount Vert thereon a Lion passant guardant Gold holding in the dexter forepaw a Sword erect embrued proper.
Motto: 'SINCERITY'

The red and silver of the shield are the basic tinctures of the arms of Warwickshire County Council and the See of Coventry within which the Rural District is situated.

The chevron is derived from the arms of the Shuckburgh family. They have been settled at Shuckburgh and have borne that name since the beginning of the twelfth century, a remarkable record of continuous tenure equalled by few families in England. The family has held a baronetcy since 1660, Sir Charles Shuckburgh, the twelfth baronet, was elected Chairman of Southam RDC in 1964.

The unusual cross is taken from the arms of the Verneys, an ancient family long associated with Warwickshire, who in 1696 successfully claimed the barony of Willoughby de Broke that had fallen into abeyance in 1522. The present Lord Willoughby de Brooke, H.M. Lord Lieutenant for Warwickshire from 1939 to 1967, is the twentieth holder of the title, and lives at Kineton.

The escallops are from the arms of the Holbech family, who can be traced in Warwickshire without a break since 1483, and they acquired Farnborough in 1683. In 1960, upon the death of Ronald Holbech in 1956, Farnborough Hall and estate were transferred to The National Trust. The escallops also commemorate the Spencer Family of Wormleighton Hall, who unlike the Shuckburghs, Verneys and Holbechs, vanished from the local scene after the mansion of Wormleighton was destroyed as a result of the Civil War. The escallop is also the emblem of St. James the Great, to whom the parish church of Southam is dedicated. The escallops therefore allude not only to the Holbech and Spencer families, but also to the name-parish and headquarters of the authority.

The mural crown as well as a symbol of municipal authority represents the important brick, tile and cement works in the district and the circlet of ears of wheat alludes to the agricultural nature of the area. The lion of England standing upon a hill and brandishing a bloody sword refers to the Battle of Edgehill, which took place during the early stages of the English Civil War between King and Parliament, on 23rd October 1642 .