From Heraldry of the World
Your site history : Southend-on-Sea
Jump to navigation Jump to search 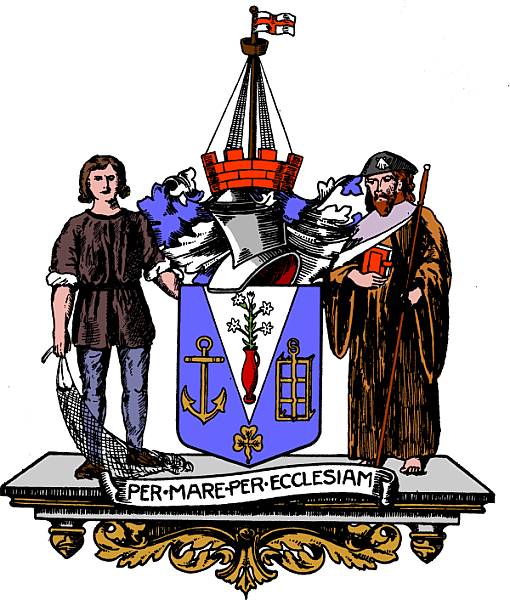 Arms : Azure on a Pile Argent between on the dexter an Anchor erect on the sinister a Grid-iron and in base a Trefoil slipped Or a Flower Vase issuing therefrom a spray of Lilies proper.
Crest : Issuant out of a Mural Crown Gules the Mast of a Ship proper flying therefrom a Flag Argent charged with a Cross throughout Gules.
Supporters : On the dexter side a Mediaeval Fisherman holding a Net with his exterior hand all proper and on the sinister side a Cluniac Monk proper holding in the dexter hand a Book Gules and in the exterior hand a Staff also proper.
Motto: 'PER MARE PER ECCLESIAM' - Through the sea through the Church.

The arms were officially granted on January 1, 1915, with the crest and supporters granted one day later. The arms were transferred from the County Borough to the Borough council on May 21, 1974.

The blue field represents the sea. On this are placed symbols of the old parishes that made up the town in 1915. The lillies and vase, symbol of the Virgin Mary are for St Mary, Prittlewell (originally a Cluniac Priory). The anchor - the symbol of St Clement - is for Leigh. The gridiron is for St Lawrence (Eastwood), and the trefoil, symbol of the Holy Trinity, is for Southchurch. The crest is a ship's mast for the historic port of Leigh on Sea.

The supporters are a medieval fishermen and a Cluniac monk. These, together with the motto, suggest the original growth of the town.

The Motto is PER MARE PER ECCLESIAM - By the Sea and by the Church.