From Heraldry of the World
Your site history : Southend High School for Boys
Jump to navigation Jump to search 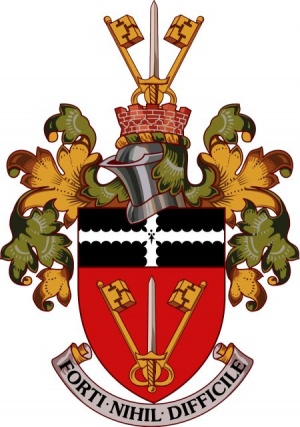 Arms: Gules, two keys in pile, bows interlaced, wards upwards and inwards, Or surmounted by a sword erect argent, pommel and hilt of the second; on a chief sable a cross engrailed of the third charged with an ermine spot of the fourth.
Crest: On a wreath Or and vert, Issuant from the battlements of a tower gules two keys and a sword as in the Arms.
Motto: Forti nihil difficile

The arms were officially granted on February 15, 1934.

If you have any information on these arms High School for Boys mail us !