From Heraldry of the World
Your site history : Southport
Jump to navigation Jump to search 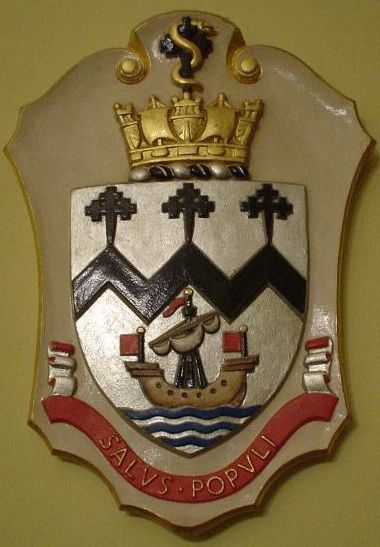 Arms : Argent a Fesse dancettee between in chief three Cross-crosslets fitchee Sable and in base upon Waves of the Sea a Lymphad proper flags flying Gules.
Crest : Issuant from a Mural Crown Or a Cross-crosslet fitchee as in the Arms entwined by a Serpent Gold.
Motto: 'SALUS POPULI' - The welfare of the people

The blason mentions a mural crown, but the arms were always used with a naval crown.

The arms were based on an unauthorized device, formerly in use, which had a lifeboat instead of the old ship, and differed in a few other ways. The original device was designed by Dr Craven, a local councillor; and he appears to have based it upon the arms of his own family — "Agent a Fess dancetty between six Cross-crosslets pointed at the foot all Gules".

The crosslet entwined by a serpent bears a resemblance to the emblem known as Aaron's Rod, or the Rod of Aesculapius, and represents healing. The mural crown is a frequent symbol of civic government.

Literature : Image and information from here, local images send to me by mail.