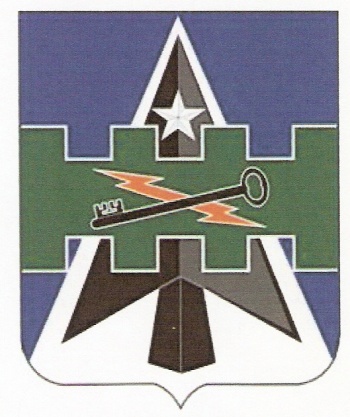 Shiled: Per pile Azure and Argent, an arrowhead Sable bering in chief a mullet of the second, overall on a fess bretessed Vert edged of the second a lightning bolt Tenné and a key, wards to dexter base and upward, on the third in saltire, both fimbriated of the second.
Crest: none.
Motto: Rely on me

The arrowhead upon the pile denotes military fortitude, respresenting the Special Troops Battalion's creation in the American West. The star suggests the forming of the unit in Texas. The fess bretessed symbolises tank tracks, indicating the organization's affiliation to the 1st Armoured Division. The lightning bolt symbolise the signal capability and the key the Military Intelligence capability. The coat of Arms was approved 15 May 2008.