From Heraldry of the World
Your site history : Spenborough
Jump to navigation Jump to search 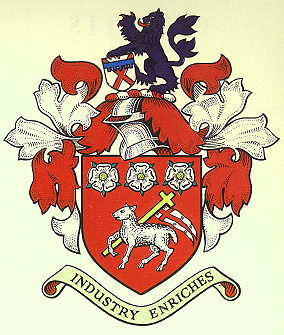 Arms : Gules a Lamb passant proper supporting a Staff Or flying therefrom a Pennon Argent charged with a Cross of the first in chief three Roses of the third barbed and seeded also proper.
Crest : On a Wreath Argent and Gules a Lion rampant Purpure resting the sinister paw on an Escutcheon Argent charged with a Saltire Gules and a Label of five points Azure..
Motto: 'INDUSTRY ENRICHES'

The arms were officially granted on September 5, 1949.

The lamb refers to the district's woollen industry and allied trades, and the roses refer to Yorkshire.