From Heraldry of the World
Your site history : Spennymoor
Jump to navigation Jump to search 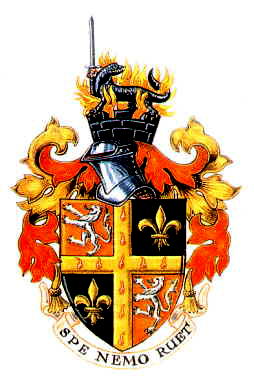 Arms : Quarterly gules and sable, a cross Or cahrged with ten gouttes de sang; in the first and fourth quarters a lion rampant argent, and in the second and third quarters a fleur-de-lis gold.
Crest : Standing on the battlements of a mural crown, a salamander sable enflamed proper grasping with the dexter claw a sword erect also proper, hilt and pomel Or.
Motto: 'SPE NEMO RUET' - With hope, no one shall fail

The quarters of red and black symbolise the furnaces and coal workings. In the first and fourth quarters is a white lion, which appears also on a red ground and set about a cross in the arms of the Attwood family. The gold fleur-de-lys appears on black in the arms of the Coulsons. Thus the two principal families responsible for the rise of Spennymoor are represented in the shield. The gold cross is taken from the arms used by Durham County Council and, with the drops of blood, recalls the combat at Butcher's Race which played a great part in the Battle of Neville's Cross. Thus the shield indicates Spennymoor's ancient and modern associations and its situation in Durham.

Above the shield is the closed helm proper to civic arms, from which is draped the decorative cloak or mantling of the basic colours or the arms - red and gold. The helm carries the crest. The walled or "mural" crown is the symbol of local government and it is coloured black to denote the association with the coal industry. The salamander is taken from the arms of the Shafto's but is entirely black instead of half green and half black as in the Shafto arms, and he holds a sword (an emblem of steel manufacture) instead of a crosslet as in the arms of the Shafto family.