St. Loyes College for the Training and Rehabilitation of the Disabled

From Heraldry of the World
Your site history : St. Loyes College for the Training and Rehabilitation of the Disabled
Jump to navigation Jump to search

ST. LOYES COLLEGE FOR THE TRAINING AND REHABILITATION OF THE DISABLED 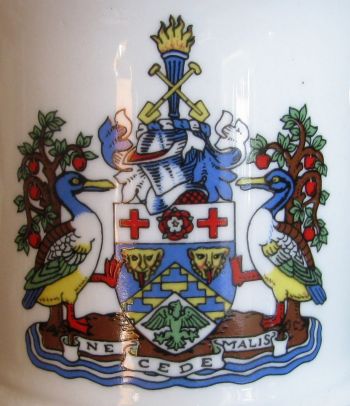 Arms: Or, a chevron potent between two leopards' faces and in base an eagle displayed sable; on a chief argent between two crosses gules a Tudor rose barbed and seeded proper.
Crest: On a wreath of the colours, In front of a torch azure fired Or two keys in saltire of the last.
Supporters: On either side a shoveller close in front of an apple tree proper fructed Or; the whole resting upon a compartment gules between water also proper.

If you have any information on these arms Loyes College for the Training and Rehabilitation of the Disabled mail us !