From Heraldry of the World
Your site history : St Bride’s Parish Church
Jump to navigation Jump to search 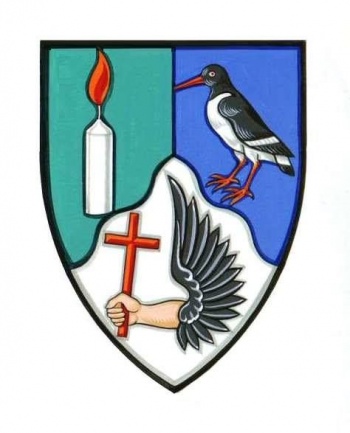 The arms were officially granted on March 5, 1966.

The shield of the arms is divided with a wavy chevron symbolising the River Clyde. The oystercatcher is included as the “bird of St Bride”, with the candle being another symbol associated with the Celtic saint. The winged hand holding the cross was taken from an emblem which had been used by the church prior to the grant of arms. The winged hand holding the cross is also reminiscent of the Coat of Arms of Clan Mackay. The Reverend Hugh Mackay was Minister of St Bride's at the time of granting of the Coat of Arms.

Literature : Image and information from the Court of Lord Lyon Facebook page.