From Heraldry of the World
Your site history : St David's College
Jump to navigation Jump to search 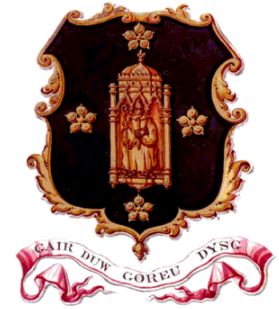 Arms: Sable, between four cinquefoils in cross Or a figure representing St. David standing in his archiepiscopal robes in a niche under a canopy, holding in his dexter hand a crosier and in his sinister a book, all gold.
Motto: Gair Duw Gorew Dysg

The arms were officially granted in 1830.

If you have any information on these arms David's College mail us !