From Heraldry of the World
Your site history : St Edmund's College (Ware)
Jump to navigation Jump to search 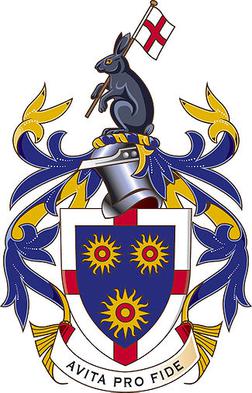 Arms: Azure three Suns in Splendour Or each charged with an annulet Gules with a border Argent fracted in four by a Cross Gules.
Crest: upon a helmet wreathed and mantled Azure doubled Or a Coney Sable sejant erect bearing upon the sinister shoulder a pole proper bearing a banner of St. George.
Motto: 'Avita Pro Fide'

The arms have been used since 1895, but were never officially granted.

The cross is the English cross and refers that the college was an English college founded by Cardinal William Allen at Douai (France) in 1568, and was used as a symbol of the college. After two hundred and twenty five years the College was driven out by the French Revolution. After imprisonment at Doullens, some professors and students re-assembled at what had been a secret Catholic School at Old Hall Green near Ware where it was reestablished on November 16th 1793, the Feast of St. Edmund of Canterbury, who lived from about 1180 to 1240, and was canonised in 1246, to whom the College is now dedicated.

In 1895, Mr. Everard Green, Rouge Dragon Pursuivant, drew the attention of the Principal of the College, Monsignor Ward, to a document in the College of Arms, which showed the attributed arms of St. Edmund of Canterbury to be Azure three Suns in Splendour Or each charged with an annulet Gules. This coat refers to the fact that St Edmund taught mathematics at Oxford before turning to Theology and becoming the first recorded Doctor of Divinity. These arms were combined with the cross in the arms.

Cardinal Allen's personal arms were Argent three Conies Sable, so the Crest links the present College to the founder. The Coney holds a banner of the original arms.

The motto 'Avita Pro Fide' can be translated as 'For the ancient Faith'.