From Heraldry of the World
Your site history : St Ignatius' College
Jump to navigation Jump to search 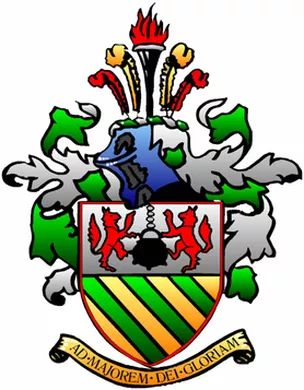 Arms: Per fesse argent and Or, in chief a caldron suspended by a hain sable, supported by two wolves rampant gules, and in base three bendlets vert.
Crest: On a wreath argent and vert, A torch sable, errfiamed proper, between four ostrich feathers, the inner Or, the outer gules.
Motto: Ad majorem Dei gloriam

The arms were officially granted on December 18, 1953.

If you have any information on these arms Ignatius' College mail us !