From Heraldry of the World
Your site history : St John's College
Jump to navigation Jump to search 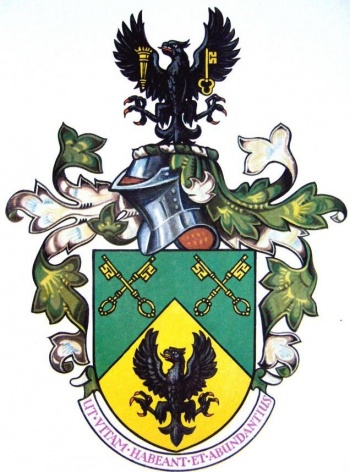 Arms : Per chevron vert and Or, in chief two pairs of keys in saltire, wards upwards and outwards, of the last and in base an eagle displayed sable.
Crest: On a wreath of the colours, An eagle displayed sable charged on the dexter wing with a torch inflamed and on the sinister wing with a key erect, the ward upwards and to the sinister, Or.
Motto : Ut Vitam Habeant et Abundantius

The arms were officially granted on September 29, 1952.

The arms showw the eagle of Saint John the evangelist, as well as the crossed keys of the Archdiocese of York. The crest shows the same elements, but with an additional torch, as a symbol for learning.

The motto underneath the crest reads “Ut Vitam Habeant et Abundantius” (that they may have life and have it more abundantly) and is based on Saint John, chapter 10, in the bible.