From Heraldry of the World
Your site history : Staats-Wappen und Flaggen (Unter dem Olympia-Banner)
Jump to navigation Jump to search 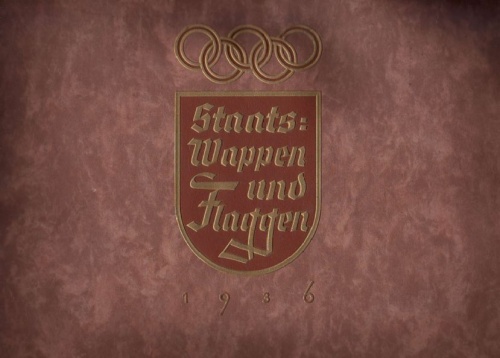 In 1936 the Sultan Zigarettenfabrik Aurelia in Dresden (Germany) issued an album for the upcoming Olympic Games of Berlin in 1936 with the arms and flags of the participating countries. However, during the printing process of the stamps, two more countries (Costa Rica and Panama) joined the Olympic Games. As the stamps were already printed and numbered, the numbering of the albums was changed. Costar Rica (101, 102) was no placed between 22 and 23, Panama (103 and 104) was placed after 72. Afterwards it was decided to add the arms and flags of non-participating countries, which were added after the participating countries, starting with nr 105. The total number of stamps in this album was 200. There is a short introductory texts and a worldmap at the end of the album.

In the same year the company started with a second album, with the title Wappen und Flaggen, as the arms included only arms of cities. The album started with nr 201 and 9 Olympic-related items, such as the medals. These were followed by 31 banners of the German army at the time. These were numbered 210-234, but 238-240 were placed between 208 and 211 (210 was between 211 and 212...). The rest of the album consisted of arms of cities, first the cities that had hosted the Olympic games prior to 1936, and after that the arms of German cities. Finally the arms of Tokio (Olympic Games 1940) was added at the end.

The German city arms were also no longer numbered in the album, but sorted based on the number of inhabitants, starting with Berlin (4.243.000 inhabitants).

The numbering of the second album is consistent up to 240. The following number 241-249 were for the former host cities of the Olympic games, but these were not numbered in the album, only on the reverse of the cards. The numbering of the German cities is very unlogical. Numbers up to 452 are known, but there are only 350 cards. Several cards were not numbered, but later overprinted with a number, and some of the higher numbers were overprinted with a lower number (f.e. Mannheim was 351, overprinted as 253; Rostock was 452, overprinted as 285). The last two cards (olympic bell and Tokio) did not have nrs 349 and 350, but 347 and 350 respectively. Tübingen ans Stuttgart were placed in between. The numbering also does not follow any logical structure (not by inhabitants as in the album, nor alphabetically nor by state/region).

The reverse shows the number and name of the country/city and some information on the cigarettes sold by the company. Two variations exist (type 1 is only seen in album 1):

The newer cards do not differ in the front for any of the cards with arms, but nearly all cards with flags had a different decoration around the flag. These are all shown below.

Some cards were also already issued before the second album was actually published. This can be seen on the reverse of some cards (type 3), which states that album 2 is in preparation. This sentence was later removed. The additional sentence can be found on cards from both albums.

The same first album was published by Adria cigarettes. 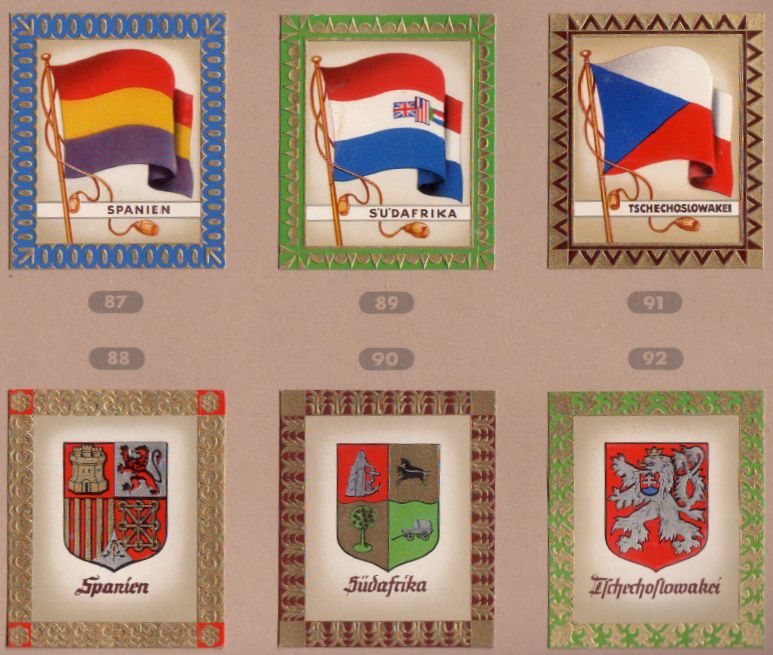 Below the list of cards by number, plus variations in the front when known.