From Heraldry of the World
Your site history : Stadtbredimus
Jump to navigation Jump to search 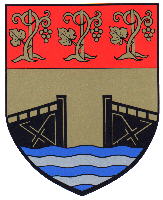 The main division of the shield is taken from the arms of the Lords and Estate of Wiltz, gold with a chief of red. Stadtbredimus belonged to Wiltz from the beginning of the 16th century. The red chief also symbolises the Prüm abbey (now in Germany), which also used a red shield with a Paschal Lamb.

The grape vines in the upper part indicate the importance of viticulture in and near the town.<