From Heraldry of the World
Your site history : Standard Bank of South Africa
Jump to navigation Jump to search 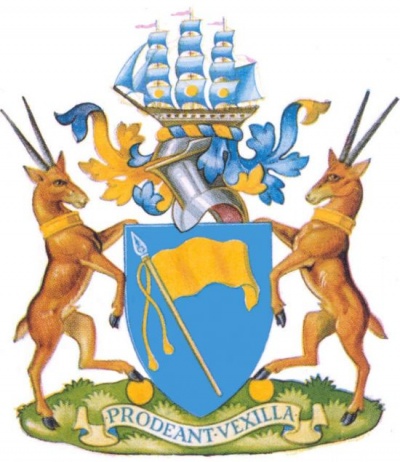 Arms: Azure, flying from a staff proper in bend sinister a standard with cords and tassels Or.
Crest: On a wreath of the colours, A three-masted sailing ship of the nineteenth century in full sail proper, the sails azure, the foresail, mainsail and mizzen sail each charged with a bezant, flags flying to the dexter gules.
Supporters: On either side an antelope proper, collared Or, resting the interior hind leg upon a bezant.
Motto: Prodeant vexilla.

As the headquarters of the bank were in London, these arms are also listed under the UK Corporate heraldry.

The ship with Golden Bezants refers to banking for trade and commerce with an allusion to the place were the bank was founded, Port Elizabeth, which incorporates such a ship in its arms.

The supporters are heraldic antelopes, an animal common to all parts of Africa, with Golden Bezants for banking.

The motto is adapted from a famous Latin hymn and may be interpreted ‘Let the Standards go forward'.

If you have any information on these arms Bank of South Africa mail us !