From Heraldry of the World
Your site history : Sterling Offices Limited
Jump to navigation Jump to search 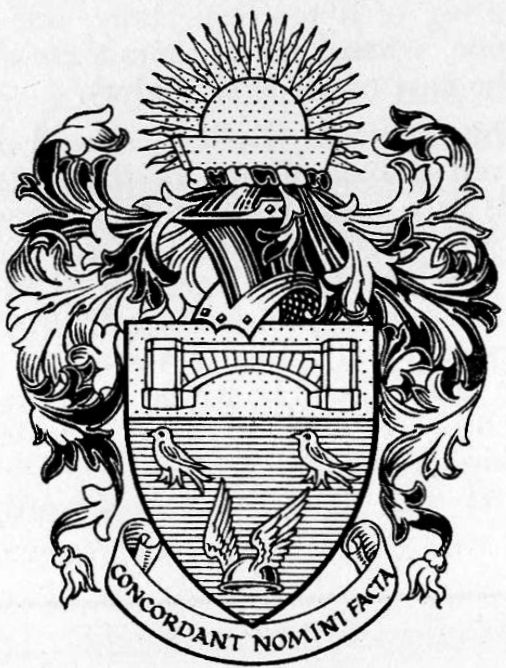 Arms: . Azure, two martlets and a cap of Mercury argent; on a chief Or a bridge of one arch proper.
Crest: On a wreath of the colours, In front of a rising sun an ingot fessewise Or.
Motto: Concordant nomini facta.

The martlet is shown heraldically without feet. It is based on an ancient and popular error that the swallow (from which this charge is derived) had no feet. The fact that the swallow is seldom seen on the ground seems to have encouraged this legend. The martlet is shown with feathers replacing the legs. Martlets or swallows (French hirondelles) are taken from the de Arundel's and are a pun on that name. In the Sterling Arms it is used as a sign of speed or swiftness (with which the bearers deal with their affairs) since it must rely upon its wings alone. The fact that it is the bird of Sussex, with which the Chairman and his family have long had personal associations, emphasises the reason for its inclusion as a charge in the Arms.

The Cap of Mercury refers to the activity as interpreters (in the widest sense), whilst the Bridge, standing as it does in the most important position in the arms, suggest the connecting link between Company and Company and Country and Country, one of the Office's principal functions, and the importance which the bearers attach to their services.

The " rising sun " has its origin in the initials of the company name — S.O.L. (Sterling Offices Limited). The ingot of gold which holds a prominent position below the sun in the crest implies the high quality of the work and service which the Office strives to render to those who avail themselves of its sterling worth.

The motto " Concordant Nomini Facta " which may be roughly translated " Our deeds suit our name " also stresses in an equally neat canting or punning form the aims of the Office.