From Heraldry of the World
Your site history : Steven A. Harris
Jump to navigation Jump to search 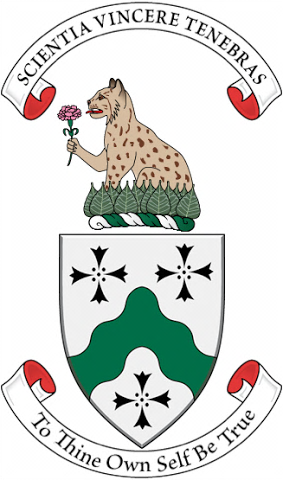 Arms: Argent a chevron wavy Vert between three crosses erminée Sable Crest: Vert doubled Argent; from a wreath of sacred fig leaves a bobcat sejant holding aloft in her dexter paw a pink carnation, all proper Motto: (below the shield) To Thine Own Self Be True (above the crest) Scientiā Vincere Tenebrās - Latin: conquering darkness by science

The silver (Argent) of the shield, often illustrated as white or gray, represents selflessness and a desire for practical simplicity, especially when weighed against the other heraldic metal, gold. Being in the middle of the spectrum, the color green (Vert) represents equality and tolerance, a rejection of extremism, an open-minded and non-judgmental acceptance of different lifestyles and beliefs, which stands in opposition to hateful bigotry and repressive convictions. Although not specified in the blazon, the specific shade of green used (sometimes called ‘watercourse green’, #006E48) was the corporate color of my first employer.

The chevron principal charge is taken from the arms of the Virginia Military Institute (VMI), where I studied Chemistry and English literature. On the arms of VMI, the broken chevron serves as an augmentation of honor for the ten cadets who fell at the Battle of New Market on 15 May 1864, under the command of Confederate Major-General John C. Breckinridge, previously Vice-President of the United States (1857- 1861). Moreover, the chevron commemorates the long tradition of military service in my family, tracing back to the American Revolutionary War. The wavy lines of the chevron answer the bend wavy on the arms assumed by my father in January 1999 (American College of Heraldry registration #1749 - I disclaimed my father’s arms on 3 March 2008). Each cross, recalling the Roman Catholic faith of my upbringing, is composed of four ermine spots – a heraldic symbol of nobility – representing my four children. Taken all together, the three crosses represent my three daughters and the chevron represents my son. The four ermine tails in each cross also evoke the four cardinal virtues (ἀρετή) as derived 25-centuries ago by the Greek sophist Protagóras: prudence (φρόνησις), justice (δικαιοσύνη), temperance (σωφροσύνη), and fortitude (ἀνδρεία).

Additionally, it is worth observing that the chevron-between-three-charges design, the sable-on-argent theme, and the ermine family of furs are all common elements in arms used by those surnamed Harris (The General Armory of England, Scotland, Ireland and Wales. Sir Bernard Burke, Ulster. London, 1884. pp 459-460).

Atop the helm sits a wreath of leaves from the sacred fig tree (Ficus religiosa), under which Siddhārtha Gautama was awakened and attained enlightenment as Buddha. Additionally, the wreath of leaves alludes to my given name, Steven, which originated from the Ancient Greek name Στέφανος, meaning “crowned with a wreath”.

Rising out of the wreath is a bobcat or red lynx (Lynx rufus), which has served as a symbol for the learned sciences since the spark of the modern scientific revolution in 1543. In Greek, Norse, and Native American mythologies, the elusive and mysterious lynx held the ability to see through falsehood and to unravel hidden truths. In Arthurian legends, a red lynx has been attributed to Sir Lucan, Chamberlain of Camelot and King Arthur’s most-learned knight.

Reminiscent of the Buddha’s Flower Sermon, the lynx (which Pliny the Elder had named a “chama” in his Nātūrālis Historia) holds aloft a single blossom. The carnation (Dianthus caryophyllus) is both January’s birth-flower and the state flower of Ohio – corresponding to when and where I was born. The carnation is pink since the supplementary color of ‘watercourse green’ is called ‘carnation pink’, #FF91B7. The flower also suggests a calm mindfulness and a contemplative temperament.

Badge of Steven A. Harris

On a scroll below the shield is an English motto: “To Thine Own Self Be True”, as spoken by Polonius to his son Laërtes in Shakespeare’s tragedy Hamlet (Act I, scene 3). On a scroll above the crest is a Scottish-style slogan: the Latin phrase « Scientiā Vincere Tenebrās », which may be translated as “conquering darkness by science”.