From Heraldry of the World
Your site history : Stonyhurst College
Jump to navigation Jump to search 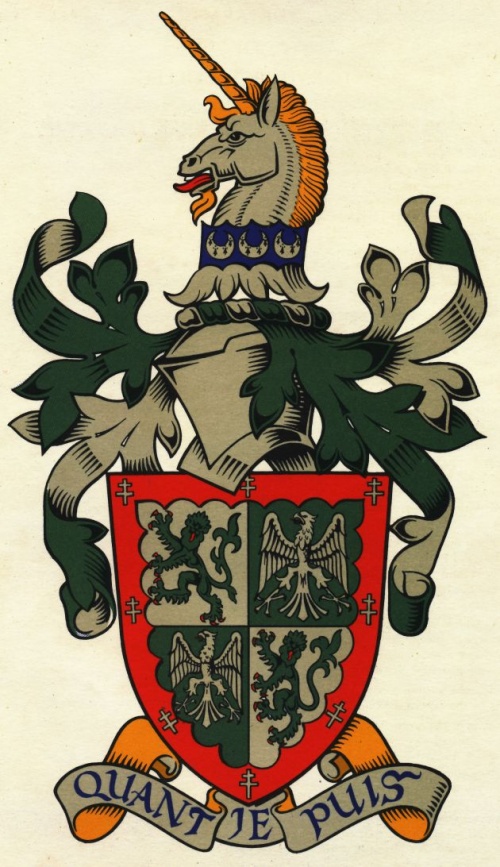 Arms: Quarterly argent and vert, in the first and fourth quarters a lion rampant guardant, and in the second and third quarters an eagle displayed, wings inverted, counterchanged; all within a bordure engrailed gules charged with eight patriarchal crosses of the first.
Crest: On a wreath of the colours, A unicorn's head erased argent, armed and crined Or, gorged with a collar engrailed azure charged with three crescents ermine.
Motto: Quant je puis

The arms were officially granted on December 28, 1953.

The green ramping lion on the silver shield is taken from the arms of Shireburn, and the silver eagle on the green field from those of Bayley. In 1373, these arms became combined by the marriage of Richard Bayley to Margaret, daughter and co-heiress of Sir Richard Shireburn, and, for some reason unknown, her family was given precedence over her husband's. Her family arms, therefore, appear in the first and fourth quarters where the husband's arms would normally be placed. The name Bayley disappeared completely three generations later, when Richard, son of John Bayley, alias Shirebum, son of John Bayley, son of Richard Bayley and Margaret Shireburn, used the name of Shireburn only.

The unicorn's head was the family crest of Shireburn-Bayley, except for the collar, which commemorates the arms of Thomas Weld, descendant of Elizabeth Shireburn and her husband, William Weld. It was this Thomas who gave Stonyhurst Hall to his old school. The Weld arms were, Azure, a fess nebuly between three crescents ermine. The red border charged with the patriarchal crosses recalls the connection of Stonyhurst College with St. Omer, for the arms of that town show a patriarchal cross argent

Stonyhurst College was founded for English boys by Father Robert Persons, S.J., in 1593 at the town of St. Omer, because the penal laws of the time made the foundation of a Catholic school in England an impossibility. In 1762, the French Parliament suppressed the Society of Jesus in France, and the School transferred itself to Brugge, where the Empress Maria-Theresa granted it a charter constituting it a College. Eleven years later, on August, 6th, 1773, the Society of Jesus was suppressed by Pope Clement XIV, and the College had to move a second time. It found refuge at Liège, where it received the protection of the Prince Bishop, Franz Karl von Velbrück, and the members of the College community voluntarily continued their old mode of life and work, anticipating that one day the Society would be restored, as indeed it was in 1814.

But the troubles of the College were not yet over. In 1794, the approach of French revolutionary armies made removal necessary again, and it was then that the College moved to England. Since about 1630, the owners of Stonyhurst Hall had been educated at the College, members of the Shireburn family first, then their distaff descendants, the Welds; and it was Thomas Weld who, in 1794, offered Stonyhurst to the College.