From Heraldry of the World
Your site history : Stroud
Jump to navigation Jump to search 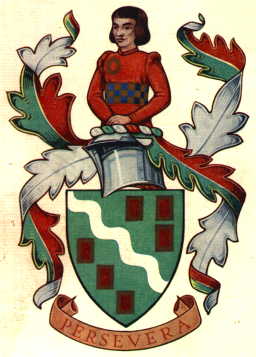 Arms : Vert a Bendlet wavy Argent between six Billets Gules each fimbriated Or.
Crest : On a Wreath alternately Argent and Vert and Argent and Gules a demi Man proper habited in the Arms Gules a Fesse chequy Or and Azure in dexter chief an Annulet Gold; Mantled Vert and Gules doubled Argent.
Motto: 'PERSEVERA' - Persevere

The arms were officially granted on July 1, 1960 to the Stroud UDC.

The abundance of water attracted weavers into the surrounding valleys and Stroud grew to become the centre famous for cloth of exceptional quality, among them the famous Stroud scarlet. The lengths of this cloth were dried in the fields and several historians have commented on the appearance of the landscape in and around Stroud, in their day. A painting in the Museum shows a panorama from Rodborough Fort, with large areas of red cloth spread out in the green fields or hung on the tenters. The design of the shield is based on this idea. The silver wavy band represents the water, on which the trade of the area, and therefore the growth of the town, depended. The green background represents the fields and the red billets the cloths laid out to dry. The gold outlines are required by heraldic laws to prevent colour being put on colour.

In 1395 at the death of a kinsman, Richard Whittington, the celebrated "Dick" Whittington, later four times Mayor of London, became Lord of the Manor. The Whittingtons remained in possession for about a century. The south aisle and porch of the old chapel, which used to stand on the site of the present Parish Church of St Laurence, was built about 1450, the Whittington arms being carved on the porch. Thomas Whittington showed his interest by being buried in his chapel of Stroud instead of the mother church of Bisley and he endowed the chapel with property and, what was in those days a considerable sum of money. Because of their certain identification with early Stroud, a knight of the Whittington family has been used for the crest.

Because of the romance of Dick Whittington, and the example to succeed by perseverance, the motto was adopted.