From Heraldry of the World
Your site history : Suffolk
Jump to navigation Jump to search 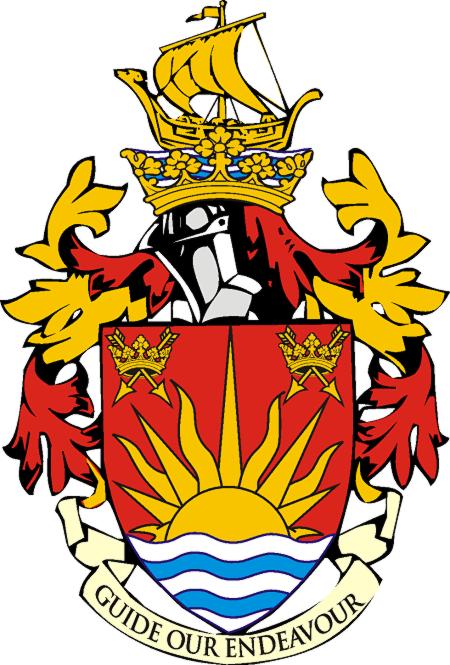 Arms : Gules a Base barry wavy enarched Argent and Azure issuant therefrom a Sunburst in chief two Ancient Crowns enfiled by a pair of Arrows in saltire points downwards all Or.
Crest : Within an Ancient Crown Or upon Water barry wavy Azure and Argent a Viking Ship sail set Or.
Motto: 'GUIDE OUR ENDEAVOURS'

The arms were officially granted in 1978.

The main charge in the arms id the sun rising over the sea. Suffolk is the most easterly county in England and thus the first to see the sun rise. The sun also refers to a poem by Michael Drayton, written in 1627. The sun was also used as the badge of Suffolk at the battle of Agincourt. The open crowns and crossed arrows refer to Bury St. Edmunds and have been widely used in the arms of Suffolk towns and districts - see St. Edmundsbury.

The crest features a Viking dragon ship, symbolising the Norse associations of the County.