From Heraldry of the World
Your site history : Sunbury-on-Thames
Jump to navigation Jump to search 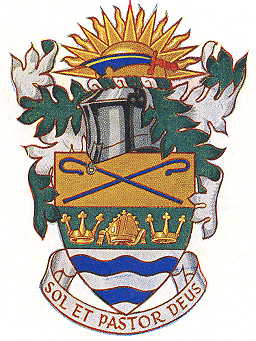 Arms : Per fesse Or and Argent on a Fesse Vert between in chief two Shepherd's Crooks in saltire and in base as many Bars wavy Azure a Mitre between two Saxon Crowns of the first.
Crest : On a Wreath Argent and Vert in front of a Sun rising Or a Seax fessewise point to the dexter Azure hilted Gules.
Motto: 'SOL ET PASTOR DEUS' - God is my sun and shepherd.

The arms were officially granted on November 9, 1948.

The arms show shepherds' crooks and an abbot's mitre for the towns of Shepperton and Sunbury respectively. The base shows the Thames river.

The motto Sol et Pastor Deus (God is my Sun and Shepherd) also most aptly connotes the place-name derivations.