From Heraldry of the World
Your site history : Sunfield Children's Home
Jump to navigation Jump to search 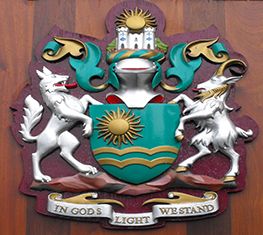 Arms: Vert in dexter chief a Sun in Splendour and in base two Bars triple arched.
Crest: Upon a Mount of New Red Sandstone in front of an Oak grove proper a representation of the Folly known as Clent Castle Argent rising above the battlements thereof a Sun Gold.
Supporters: Standing on a mound of New Red Sandstone proper on the dexter side a Wolf and on the sinister side a Goat both Argent the latter armed unguled and bearded Or.
Motto: In God's light we stand

The arms were officially granted on October 1, 1990.

The shield expresses its name; the golden sun in dexter chief depicts the two gifts that the sun bestows upon the earth, light and heat, and symbolically stand for the light of understanding and the warmth of love, two gifts that Sunfield seeks to grant the children in its care. The field, Vert, represents the 'field' in the name, whilst the two triple arched bars can be seen as furrows of earth reflecting and absorbing the warmth and light of the sun so that their combined efforts become fruitful.

The crest expresses the locationof the Children;s Home with a hint of its aspiration. On New Red Sandstone, the rock that forms the Clent Hills (the name Clent means 'rock') within a grove of oak (reflecting both Clent and Selly Oak, the school's present and former location) stands a representation of the folly known as Clent Castle topped by the rising sun.

The supporters a wolf and a goat are taken from the realm of folklore and fairy-tale, appropriate for a children's home. They reflect the lion and the unicorn (a carnivore and a horned ungulate) at a more homely level, but their significance is open to various interpretations. They could stand for the two kinds of handicap in Sunfield's children, the wild behaviour problem on the one hand and the genetic mischance on the other; like the animals, each has its good side - the wild can be fiercely loyal while the obstinate can also be resolute. Again they might be seen as standing for those who literally support Sunfield, the workers and the givers, or the W and G theme could stand for the two founders, Wilson (whose family bears a wolf in their arms) and Geuter (with a play on the sound of the name).