From Heraldry of the World
Your site history : Swimming Teachers Association
Jump to navigation Jump to search 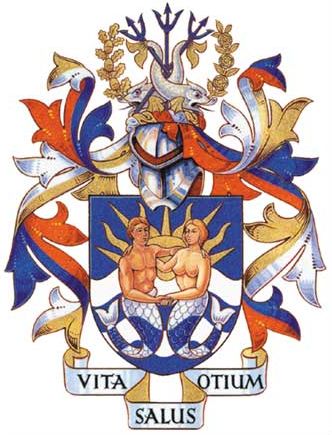 Arms : Per fess wavy Azure and barry wavy of four Argent and Azure rising in chief a Sun in Splendour issuant Or overall a Merman and a Mermaid embracing and supporting each other their tails counterchanged.
Wreath: Or Argent and Gules. Mantling: Gules and Azure doubled Or and Argent.
Crest: Two Dolphins embowed with their heads downwards Argent finned Or and tails entwined with two Tridents in saltire in front of a like Trident in pale Azure between on the dexter a Sprig of Oak fructed and on the sinister a Rose Branch of the second.
Motto: VITA SALUS OTIUM

The arms were officially granted on December 15, 1971.

If you have any information on these arms Teachers Association mail us !