From Heraldry of the World
Your site history : Sydney Church of England Grammar School
Jump to navigation Jump to search 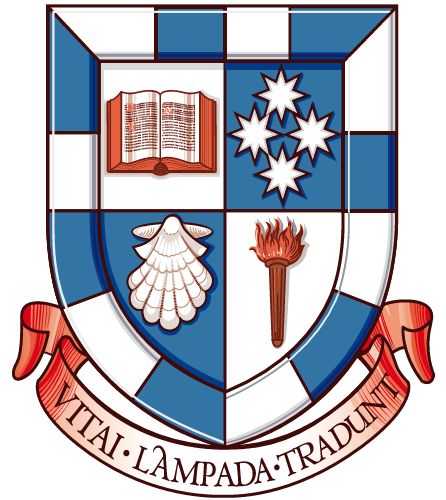 Arms : Quarterly, Argent and Azure, in the first quarter an open Book proper, in the second quarter four Mullets of eight points in cross and in the third quarter an Escallop of the first, in the fourth quarter a Torch fired proper, the whole within a Bordure compony of the fir ;t and second.
Motto: 'Vitai Lampada Tradunt'

The book (a Bible) and the Southern Cross refer to the fact that the School was founded by the Church of England in the Diocese of Sydney (the second quarter being the actual Arms of the See).

The escallop, traditionally associated with Saint James, derives from the School's connection with an earlier 'St James' School', from whose funds the School was founded. The torch was in the School's first badge, designed by the first Head­ master, Mr E. I. Robson, before the School opened in 1889.