From Heraldry of the World
Your site history : Sydney Stock Exchange
Jump to navigation Jump to search 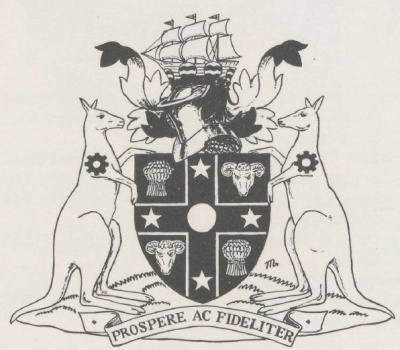 Arms : Azure, on a Cross Gules fimbriated Argent between in the first and fourth quarters a Garb Or, and in the second and third quarters a Ram's Head caboshed also Argent armed Gold, a Bezant between four Mullets also Gold.
Crest : Out of a Coronet composed of six Fountains set upon a Rim Azure, a three-masted Ship in full sail Argent with pennons flying to the dexter each charged with a Cross Gules.
Supporters : On either side a Kangaroo Or charged on either shoulder with a Cogwheel Azure.
Motto: 'Prospere ac Fideliter'.

The tinctures of field and cross (St George's), the mullets (representing the Southern Cross), the garbs, or wheatsheaves (agriculture), are similar to those in the Arms of New South Wales, and the rams' heads (for the pastoral industry) echo the fleeces in those Arms, the bezant representing finance.

The Crest is indicative of the sea, and of commerce and trade, a similarly blazoned ship appearing also in the Arms of Sydney. The cog-wheels on the shoulders of the supporting kangaroos represent industry.

The motto is taken from a circular issued in 1860 by Josiah Mullens, who became the second chairman of the Exchange in 1875.