From Heraldry of the World
Your site history : Taddy& Co - Heraldry Series
Jump to navigation Jump to search 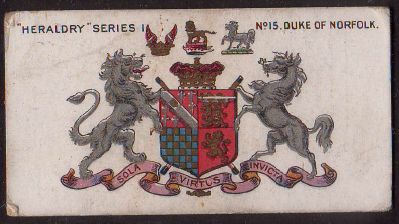 James Taddy & Company was established in 1740 as sellers of Tobacco, Snuff and Tea and during the 1890's they became well known for the excellence of their trading cards. The company was extremely prosperous and the owner, Gilliat Hatfield, who believed in rewarding his employees well, ensured that their wages and conditions were superior to those of his rivals, dispensing with the need for any union representation. However, the cigarette industry went on strike during the 1920's and although the Taddy factory workers were already being paid more than the unions were demanding for the rest of the industry, his workers joined in the strike. Upset by these actions he requested that his workers return to work or he would shut down the factory. They did not and the factory was duly closed. (source)

The series shows the coats of arms of Dukes in the United Kingdom.