From Heraldry of the World
Your site history : Taunton
Jump to navigation Jump to search 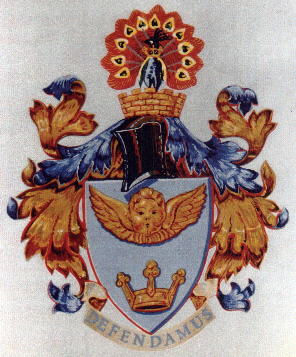 Arms : Azure in chief a Cherub and in base a Saxon Crown Or.
Crest : Issuant from a Mural Crown Or a Peacock in his pride proper gorged with a Saxon Crown Or; Mantled Azure doubled Or.
Motto: 'DEFENDAMUS' - Let us defend.

Previously the Borough had used an unauthorized device consisting of a cherub above a royal crown, based on a seal dated 1685. When the arms were granted the royal crown was replaced by a Saxon crown, as it could not be used without a special licence from the King, and if such licence were obtained the crown would have to be placed above any other emblem in the arms. The replacement Saxon crown has reference to Ine, King of the West Saxons, founder of Taunton. The cherub probably refers to the priory founded in the reign of Henry I by William Giffard, Bishop of Winchester.

The mural crown is a symbol of civic government and the peacock was derived from an ancient seal of the Borough believed to date from about 1180.

The coat of arms for the Borough of Taunton was first recorded in 1685 when it was depicted on a hand seal as a winged cherub's head above an Imperial crown. John Collinson writing in 1792 recorded that the original seal showed an eagle with wings displayed standing on an Imperial crown. This might suggest that the cherub's head is a misrepresentation and that the twin symbols of authority - an eagle and crown - were intended. The arms were probably adopted in or soon after 1677 when the town's charter was restored.

The peacock which features on the crest as derived from the peacocks shown on the vase of the town's thirteenth century seal as space-fillers and the rural crown refers to Taunton Castle.

The motto Defendamus - we shall defend, also recorded first in 1685, clearly refers to the civil war sieges of 1644/5 when Taunton refused to surrender to royalist forces. Defendamus was also the title of a grand pageant staged in the town in 1928 and an anthem, composed that year by Laurence Tanner of Bristol with words by Major MF Cely Trevilian. The words of the second verse are still occasionally sung: Love of country, self forgetting; Equal law for small or great; Custom, harbinger of freedom; Throned in worship, thought and state; These the lessons we must master, These the things which to the end- Though the heavens crash around us To the death we must defend.