From Heraldry of the World
Your site history : Tenby
Jump to navigation Jump to search 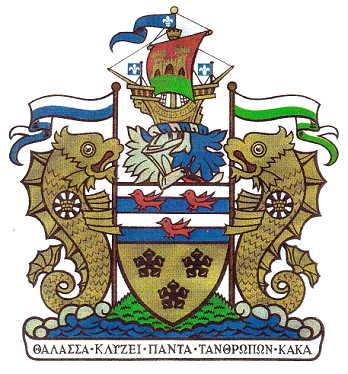 Arms : Or, three cinquefoils sable; on a chief barry offour argent and azure three martlets, two and one, gules.
Crest : On a wreath argent and azure, A lymphad Or, the sail gules charged in base with a mount vert thereon a port between two towers Or, pennon and flags flying azure, each charged with a fleur-de-lys argent.
Supporters : On either side a dolphin Or charged with a roundel gyronny of sixteen argent and sable, thereon a mural crown Or, supporting between the fins a staff proper, flying therefrom a forked pennon, that on the dexter per fess argent and azure, that on the sinister per fess argent and vert. The compartment a mount issuant from waves of the sea proper.
Motto: ΘΑΛΑΣΣΑ ΚΛΥΖΕΙ ΠΑΝΤΑ ΤΑΝΘΡΩΠΩΝ ΚΑΚΑ

The arms were officially granted on August 1, 1963.

The shield previously appeared for centuries upon the ancient seal above a stylised castle. The upper half is evidently derived from the arms of the de Valence Earls of Pembroke, who built the castle and walls and gave the earliest charters. The lower half of the shield is believed to be based on the arms of the See of St Davids. The de Valence martlets are shown red upon white and blue bars, and the cinguefoils black upon gold, as in the parent arms.

The crest-wreath is in the de Valence colours of blue and white and the crest itself combines the ship and castle from the two sides of the ancient seal. The white fleur de lys on blue refer to St Mary the Virgin, patron Saint of the Parish.

The two heraldic golden dolphins refer to Tenby's descriptive Welsh name "Dinbych-y-Pysgod", and allude not only to the ancient fishing industry but also to the modern importance of Tenby as a seaside resort. They support pennons bearing the white and blue liveries of the House of Lancaster and the white and green of the House of Tudor, in reference to the Charters of Henry IV and Elizabeth I. The roundels derive from the badge of the Round Table which presented the arms to the town. The gold mural crown set over the black and white background suggests the links between the Round Table and the life of the town.

The motto in Greek, over the door of Laston House (the Tenby Bath House), is from Eurpides "Iphigeneia in Tauris".