From Heraldry of the World
Your site history : Thames Traditional Rowing Association
Jump to navigation Jump to search 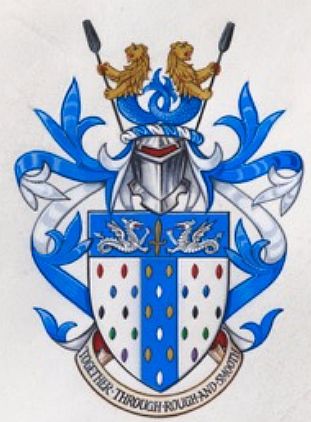 Arms : Argent semy of pointed ovals Gules, Azure, Sable, Vert & Purpure a Pale Azure semy of pointed ovals Or and Argent on a chief also Azure sword erect Or between two Sea Dragons fesswise respectant Argent.
Crest: Two Sea Lions addorsed the leonine parts rampant Or the piscine parts with tails entwined Azure each holding with the paws an Oar that on the dexter bendwise and that on the sinister bendwise sinister Sable.
Motto: Together Through Rough And Smooth

The Sea-dragons at the top of the shield with the sword of St Paul between them are a tribute to the City of London, where all members of the Association are based, while the two Sea-lions holding oars in the crest could stand for the stalwart rowers who do the hard work, propelling the cutters along the river. The little mandela, or pointed ovals, represent a disciplined flotilla of boats in all the colours of the members' liveries. The chief and pale together make a bold 'T' for Thames, which shows up well from afar.

The initial letters of the motto, Together Through Rough And Smooth, appropriate in itself, are those of the Thames Traditional Rowing Association.