Your site history : National Arms of Eritrea
Jump to navigation Jump to search

NATIONAL COAT OF ARMS OF ERITREA 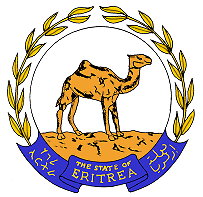 The logo shows a camel between laurel branches. Below the name of the country in Tigri, English and Arabic.

The first arms for the then Italian colony of Eritrea were designed in 1919. The arms show a red lion with a star in the upper half and a wavy lower half. The meaning of these I do not know.

After the change to fascist rule in Italy, the colonial arms were changed by adding the new national Italian symbols in the upper part of the shield.

From 1941, when the colony was liberated, until 1952 the old arms were restored. In 1952 Eritrea became part of Ethiopia, but kept its own symbol, an olive branch in an olive wreath. After the complete annexation by Ethiopia the logo was abolished.

Only after independence a new state logo was adopted.